Jimmy arranged for a bus to take most of the Odyssey participants to see the Panama Canal expansion project, to go to Panama City, to see Balboa (where the Canal begins/ends at the Pacific side) and to meet the president of the Panama Canal Authority. Bill volunteered to stay at the boat to meet with people scheduled to assist us; Tim and I went on the bus.

First a little background. The Panama Canal was completed 100 years ago (after decades of work, and horrendous loss of life to disease — I’m told “The Path Between the Seas” is a fascinating book about it, though I haven’t read it). The Canal is 48 miles long. It runs approximately north/south; the north end is the Atlantic/Caribbean side, south is the Pacific. The path makes use of a large lake that was created via dams as part of the canal project. There are locks at each end of the Canal, to raise vessels up about eighty-five feet to the level of the Gatun Lake. The lake also supplies the water to operate the locks.

The dimensions of the locks (and to a lesser extent the clearance of the bridge at the Pacific end) determine maximum size of a ship that can transit. The design of some ships is based on these dimensions, and such ships are called “Panamax.” While a Panamax ship is big (close to 1000 feet long, 106 feet wide, with a draft of 41 feet), much larger ships exist that cannot transit the Canal.

A project is underway to build new, larger locks alongside the existing ones, to accommodate larger ships. (And to facilitate maintenance of the old locks, since it will become possible to close them down when needed, without closing the Canal entirely.) It was hoped that the project could be completed in 2014 for the 100th anniversary of the original Canal opening, but naturally there have been some delays. It is now expected that construction will complete this year, and it will open for commercial use next year. End of background.

Jimmy had arranged for us to visit the construction site of the new Atlantic-side locks. Shortly before the trip, he was informed that we would not be allowed to enter the site. But Jimmy has connections, and he called a person in a high place who once said, “If you ever need anything in Panama, call me…” Apparently he meant it, because within minutes our trip was back on track.

Our bus route required that we drive across the existing canal. At the Atlantic end there is no permanent bridge (yet), so driving across is accomplished via a one-lane movable bridge that is swung into place when a ship is not passing. 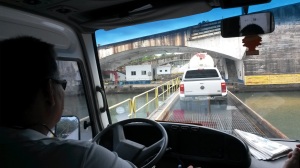 As it happened, just as we were crossing the lock doors were closing on a Panamax ship, so this photo from the bus gives you a sense of how it “just fits” into the old lock.

On to the construction site of the new north-side locks. Jimmy introduces Dave Wilson, who is his friend, an American ex-pat, a sailor who fell in love with Panama while living on his boat, and a project manager for the construction effort. We keep Dave busy for the next hour or two with endless questions. But first we all must don hard hats and high visibility vests. 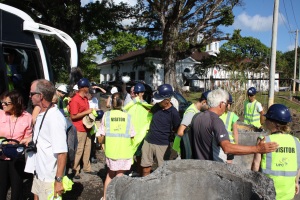 From this vantage point we see a set of three huge retaining pools that will be used to hold the water released from a lock as a ship descends, so the water can be re-used to fill another lock. This design (which has been used for hundreds of years, but not at this scale!) will allow the new/large locks to operate with about the same amount of water loss (from the lake) as the old locks, yet the new ones will accommodate three times more tonnage of cargo in the transiting ship(s).

This leads to some environmental impact thoughts. Of course the water concern is more about retaining the expected depth of the lake, to accommodate the large ships, than it is about the environment, yet the project design seems to include a serious focus on the environment. For example, for every tree cut to make way for the new channel, two were planted. And a contractor was hired for the sole purpose of moving individual animals, from spiders to crocodiles, away from the construction area.

[Dave tells the story of what the process is for relocating a crocodile, which might be up to 20′ long. First a lasso is gotten around the head or tail. Then a second lasso around the other end. Then several more lines around legs, or whatever. A loop is tied around the jaws, and 4 or 5 men jump on the animal’s back — it cannot run with this added weight. Then the legs are “hog tied,” and the animal can be moved to the new location. At that point the process is reversed, more or less, except that the men remain on the back to prevent its running…until all lines are removed. Then on the count of three, the men RUN!]

[As an aside, here’s a question that I found mentally challenging,  regarding water usage in the locks.  Does it require more water to move a few small yachts through the Canal than it does to transit a Panamax ship…?  As Tom and Ray used to say, write your answer on a twenty dollar bill and mail it to us!]

We drive in the bus down to the lake-end of the new locks.  We’re on a narrow strip of land with Gatun Lake on one side…

On the other side we are looking down into the length of the new locks.  Dave explains that where we are standing is the “Gatun plug,” and it has been the source of perhaps the most sleepless nights of the project. It is this strip of land that will be excavated last, and until then  it is preventing Gatun Lake from draining into the new locks (potentially killing workers, destroying some of the work, and draining the lake such that it would require several years of rainfall for it to fill back in after a new plug were constructed). The “plug” has been reinforced with concrete shafts, and is constantly monitored for any sign of leaks. As anyone knows who has built dams on the beach, if a leak gets started the dam will wash away, with little hope of stopping it.

One of the notable features of the locks is the “gates.” Instead of having swinging/opposing pairs of gates, like the old locks, the new locks have massive gates that slide across the channel (and which can be moved into different recesses for maintenance purposes). The gates were built in Italy. They weigh up to 4000 tons each! One hundred feet tall, 180 feet wide, 10+ feet thick. Four gates were secured upright on the deck of a ship to transport them from Italy, and a special dock was constructed in Colon to unload them. Here is one of the gates on its way to being inserted into its slot in the side of the lock. The truck on its way down to the bottom gives some sense of the scale, but the car further on down the bottom of the lock makes the size even more clear. 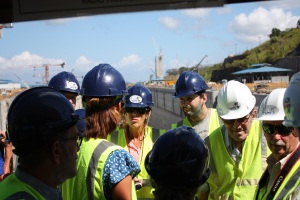 Back on the bus, Dave tells us that “if they don’t stop us” we’re going to now drive down into the locks! We will be one of the first to “transit” the new canal. They don’t stop us.

Jimmy presents Dave with a BPO plaque, and we give Dave a big round of applause. What an amazing and unique experience! 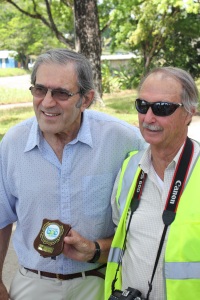 Back on the bus, and across the isthmus to Panama City. (We make a quick stop at a bank with ATMs so a dozen people can get much-needed cash. Panama uses the American dollar for currency, which makes things a little easier, but always more cash is needed than planned…) Then on to the old part of the city, where we take an hour to explore on foot. 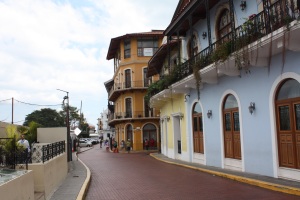 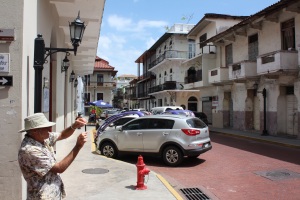 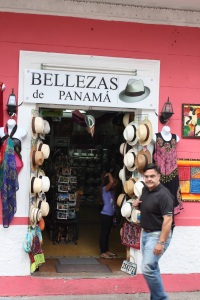 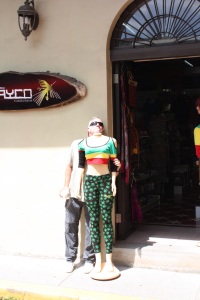 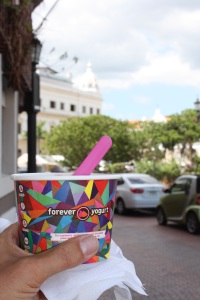 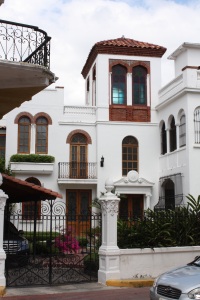 Back in the bus…

…to Balboa next, so we can see where we will be when we exit the Canal.

Then after a short stop at a lousy cafeteria (and changing from shorts to “dress” pants), we’re on to meet with El Presidente of the Canal Authority. I considered taking a nap in the air conditioned bus, and skipping this meeting. But I’m very glad I didn’t! We met around a very official-looking conference table, with one person from each crew at the table, and others in chairs around the room. Enter senor Jorge Luis Quijano, who is a delightful guy and speaks fluent English (studied in Texas). After some pleasantries about sailing he asked if we had any questions. Tim (naturally) says, “I have a controversial one… Nicaragua…?”

I skipped Nicaragua in my introduction. They are (maybe) building a canal to compete with the Panama Canal. Our host had obviously addressed this issue many times, and it was interesting to hear what he had to say about it. The Panama Canal is a huge part of the Panamanian economy — extremely profitable, so of course they are paying attention to all the alternatives. There is the possibility of ships using the Northwest Passage. But despite the effects of climate change, this remains a risky proposition, where a ship might approach the area only find that the route is closed. Or worse, find themselves caught in the ice. There is Cape Horn, but that is very far out of the way, as well as being plagued by severe storms. And there is “the other way around.” I.e., travel from China to the US East Coast by sailing west, via the Suez Canal, instead of east via Panama. The latter option, especially, is primarily a time/cost/fuel financial calculation. Big ships, by the way, pay more than a quarter million dollars to transit the Panama Canal transit.

Senor Quijano was very diplomatic about the Nicaragua project. It will require excavating 10 times the amount of earth excavated in Panama in total over the past 130 years. The Panama Authority has a pretty good idea, based on very recent experience, what it takes to dig a big ditch. The Nicaragua schedule is to build it in five years. Senor Quijano says to accomplish that they would have to import half a million Chinese, and build all parts of it at once, which would add many challenges. And he asserts that there is not sufficient demand to support two canals, so if another one is built they will have a price competition, and thus the financial return expected in Nicaragua would probably not be realized. I am making no assertions about any of this, but I found what he had to say extremely interesting.

We then presented him with a Blue Planet Odyssey plaque, promised that Jimmy would invite him to his boat when Aventura arrives in March, and thanked him profusely for meeting with us. We all lined up in front of the room’s mural of the Canal for a group photo. (The official photos might show up on the BPO web site soon.) Senor Quijano then surprised us by presenting each of us with a “Canal de Panama” cap. Cool!  Back on the bus, we sit in city traffic for an hour, and then an hour on the highway back “home” to Shelter Bay. Long day. Fabulous day!