Australia is big. And varied. We had a week to spare to explore it… So the strategy was to choose just one area, and we chose the Northern Territory. Hallie, Jesse and I flew to Darwin and did four days of tours in Kakadu National Park. This area has spectacular scenery plus it is the home of many of the aboriginal people who lived here for 50,000 years +/- before Europeans showed up with metal and guns and greed and diseases.

Of course the arrival of the Europeans did not go well for the people whose home this was. In many ways what happened is similar to what happened in North America when the Europeans arrived. One difference is that this area is remote, harsh, tropical — not a place that was readily overrun with immigrants. So there are still large areas that are nearly “wild,” and still the homeland of the people who are now called the “traditional owners” of the land. In fact, in Arnhem Land whites cannot enter without a permit.

The aboriginal culture is complex, and I understand little of it. The creation myths are referred to (by English translators/interpreters) as Dreamtime. But Dreamtime is not exactly a “time” — it is not just a distant past, it is another dimension of experience that can be accessed today. There is no written language. There are Stories. And there are paintings on the rock that relate to the Stories.

Each child born falls into a classification system that determines who s/he can marry. It also determines which Stories are his/hers. All children learn Stories for a level of general knowledge, but the “graduate level” gets more specialized. You must learn the particular Stories for your group, and tell them and pass them on.

One of our guides explained that you must learn to “feel” with more than the five western senses. He had our group walk over an area where he said we might be able to sense something unusual. Nobody noticed. He turned to Hallie, and said, “Didn’t you feel that?” Hallie apparently has an aura that told him she would be more attuned to the vibrations. The source of the vibration in this case was underground water. He then had Hallie stand in a particular spot, where her body felt an internal heat. This, he said, was a stagnant underground pool. Not a good place to make your camp. Westerners make the mistake all the time of buying or building a house where the energy is bad. Such a simple mistake to avoid if you are tuned in. The aboriginal children grow up tuning in. All children sense these energies, he tells us, but in the West we teach children that these sensations are not real, while here the children are encouraged to develop the ability.

Our guides were fabulous — gentle, caring people willing to share a wealth of information. We could only absorb a tiny amount. But Jesse got recommendations for two books, so we can learn more.

Although the locals divide the year into six seasons, the big distinction is wet versus dry. We are at the end of the dry season. This means that most areas are accessible by 4WD, but the waterfalls have no falling water. In the wet season many of the areas we visited are under 3 or 4 metres of water! Because it is dry season, the crocodiles are in the remaining water, in the billabongs. In wet season they spread out over the flooded countryside. So…we saw LOTS of crocs! 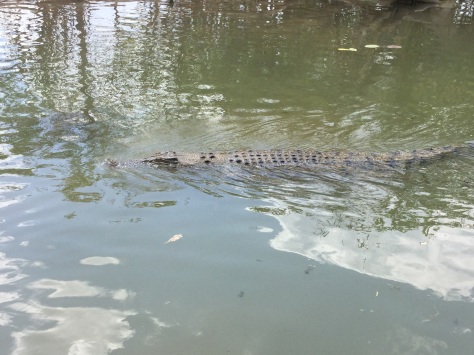 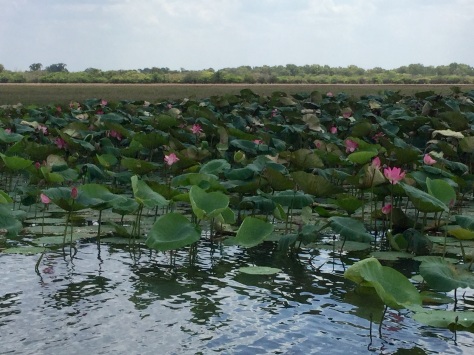 The photos above are just from Day 1… Brace yourself for three more days! 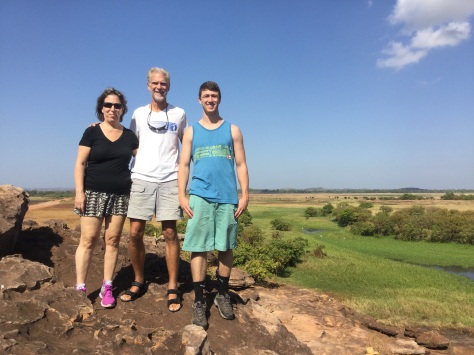 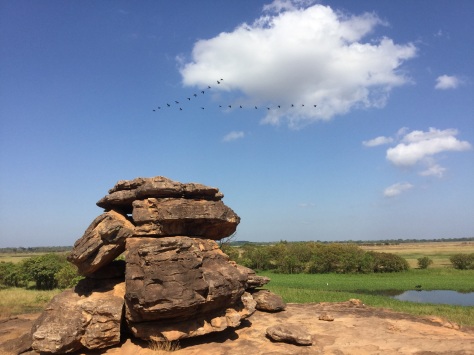 End of Day 2 of our four days in Kakadu. Next we head for Jim Jim Falls and Twin Falls. The falls are from an escarpment 500 kilometers long, down to the flat floodplain below. The river gorge is not the result of water erosion, but of the shifting plates of the earth’s surface ripping open this long rift. 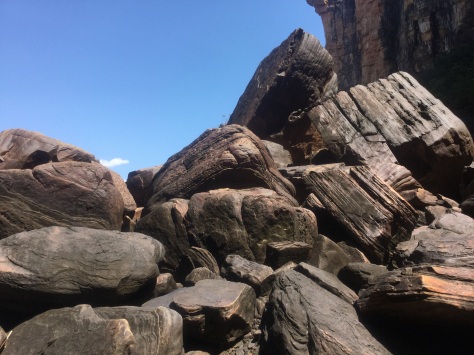 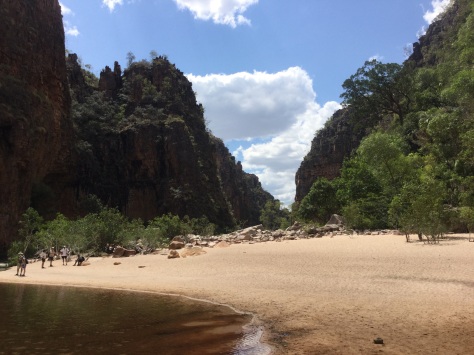 Back to our comfy hotel (built in the shape of a crocodile), exhausted. But we still have another day in Kakadu, starting with Ubirr Rock… 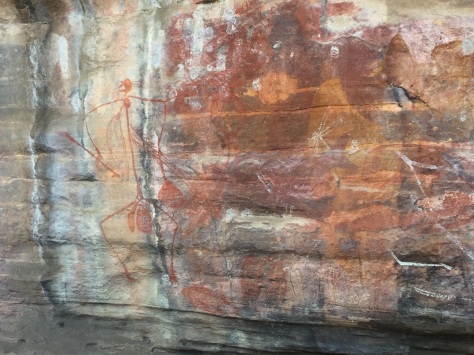 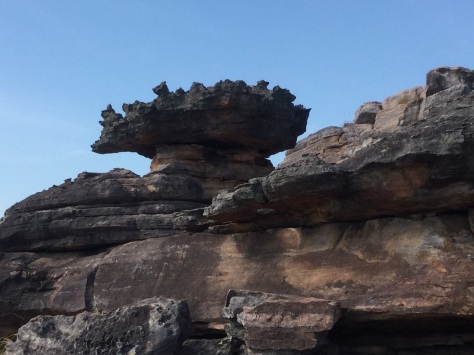 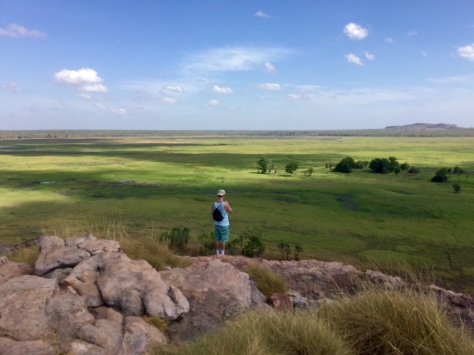 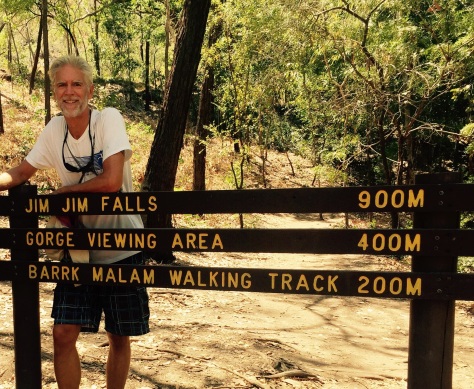 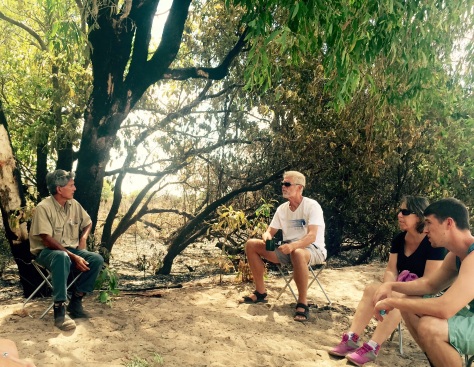 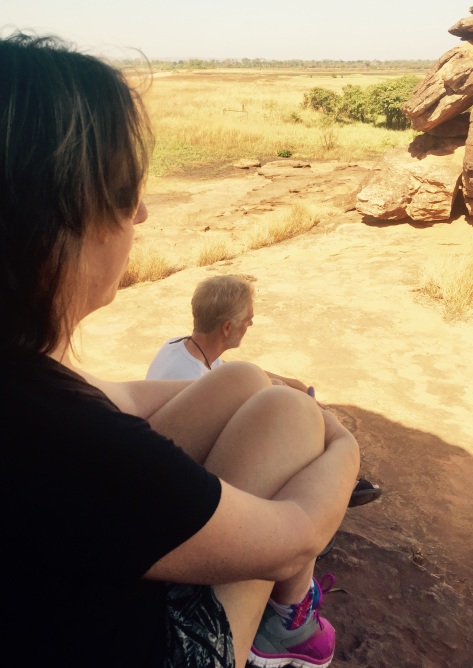