Just left Hallie at the ferry to the airport. Time now to focus on the voyage once again. We pick up Bob at the airport ferry in the morning. We have a few boat chores to do, and we will make another run to the supermarket. Then we check out Monday morning, and go to the bank to get our “bond” money back. (If you’re not an EU citizen and you don’t have a plane ticket home, you have to deposit a bond for the cost of a plane ticket, and you get it back after you check out.)

We have visited three distinct parts of French Polynesia. The Marquesas were awesome, and it is hard to imagine any other place measuring up. By the way, did I mention that the Marquesas left their mark on me…? 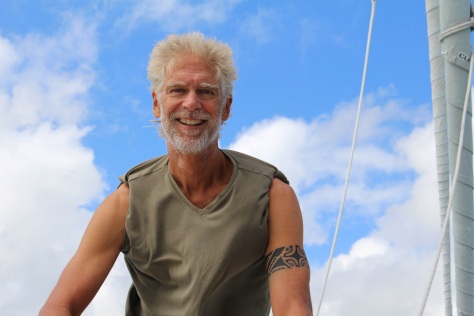 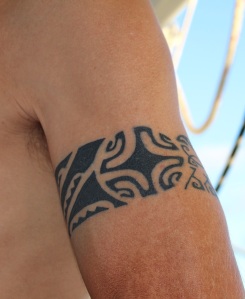 The squiggly cross is a symbol of the Marquesas. The dark/shark teeth area is about strength and courage in the physical world and beyond. On the back are three rows of symbols that you can’t much see. One is a symbol of waves/voyaging, one of sea turtles, which are a symbol of protection (at sea, by juxtaposition), and the third row is a symbol of men, which could refer to family, to my sailing partners, to having ‘brothers’ in my life, or more specifically I think of them as a symbol of my men’s team.

And someone took this photo of us attempting to join in a dance in Ua Pou (also Marquesas). (I have a fun video of us learning the pig dance, but still I cannot upload video, so ask me about it when you see me!) 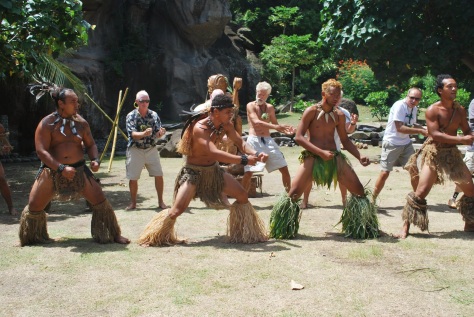 Part 2 of French Polynesia was the Tuamotus — the atolls. Very cool in a very different way from the macho Marquesas. And then Part 3 has been the Society Islands, starting with Tahiti. It has taken a while for the Society Islands to grow on me, but they have. I think particularly with the drumming, joining in the dancing (another good video you can’t see now!), and the wonderful friendliness of the Polynesian people. And having a fringe reef around the rugged islands is the best of both worlds (impressive sights plus calm anchorages).

At the start of the BPO this question might have had a simple answer. We just follow Jimmy Cornell to whatever destination he declares. But Jimmy is not here. And in fact three additional boats have just dropped out: Ransom, Libby and Coconut Woman. They all have good reasons, and I wish those crews all the best, but boy will they be missed! On the other hand, Tahawus is back in.

And then there is Joyful — the boat that lost their crew back in Key West just before departure. They found crew, and set out to catch the fleet (if we can still be called that). They went non-stop from Panama to the Marquesas– 40 days! And then direct to Bora Bora. They caught up, but the skipper is not feeling well, and seems to have some unidentified infection. They may also have to drop out of the BPO.

So our “fleet” in this voyage-of-attrition is now Tahawus, Chapter Two, Maggie, Drina (a boat that went through the Northwest Passage and will be joining us in the coming weeks), a questionable Joyful, and ourselves! Getting individual attention from the BPO reps is wonderful, but you can’t help but wonder if we have a critical mass to hang together.

In any case, there are many paths that can be followed between here and Australia. We all plan to rendezvous in Vanuatu. But that’s over two months away. I think most boats will rendezvous in Vava’u in two weeks. Whatever…we’ve got a plan, and hopefully we will cross paths with others. And if not then we’ll just have to make some new friends. Our plan is to stop in Maupiti (still French Polynesia) on our way out. Then skip the Cook Islands and go to Niue. Then Vava’u (Tonga). Then tentatively Tuvalu, but that’s too far ahead to really know at this point.