Sold the boat! (Pending a survey.)

Of course it is what I wanted. And I’ll be ready just as soon as I say I am, and let go. And…very important…her new owners Tom and Jane are wonderful people who plan to do a ton of work bringing her back to near-new condition.

John Lombardi (builder) has been tremendously helpful, and the boat is in the right hands for the upcoming refit. Chris Lombardi has been great as the broker.

And what to say about Hallie, who insisted that she come here to work with me on the boat, and without whom I could not have completed the work. She has toiled nonstop for three very long days. But that’s only one star in the Milky Way of her contribution to this voyage. She has supported me every nautical mile, whether in spirit, or handling my financial affairs back home, or flying to join me in Tahiti and Australia and Brazil and the Caribbean and Wanchese. Always there with the love and support. A partner on so many planes! (Get it?)

And…there is a sweet little trimaran parked right next to No Regrets. I wonder if she might be for sale………..

Is this the end of the blog? Time will tell, but I think not. Regardless, this would be a great time for all you readers who haven’t commented (as well as those who have) to post a comment with your thoughts. I’d love to hear from you! 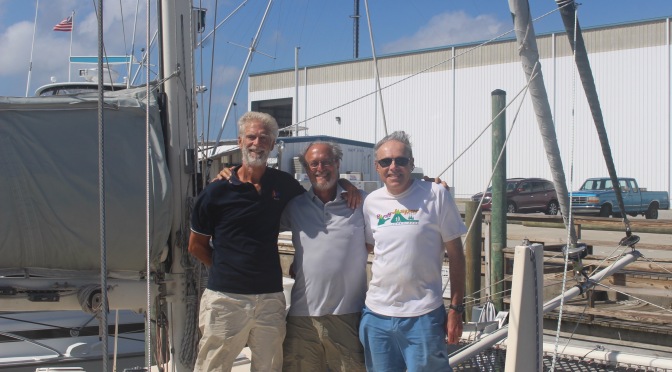 We chose to come to Wanchese (near the Outer Banks of North Carolina) because John Lombardi works here. John built No Regrets eighteen years ago. We thought he would be the perfect person to do the work needed on the boat. Might be fun for him, too, to see one of his creations many years later.

After making a plan to meet John in Wanchese, I was contacted by his brother Chris, who is a yacht broker, saying he had a client interested in an Atlantic 42. After some more arranging, his client is flying in at the end of this week. We’re going to see how much work John can get done in those few days, and how much I can make the boat presentable!

But first we had to get here. In Southport we had a fun dinner with Pip, who had sailed aboard Ransom in the BPO to French Polynesia. Then up the Intracoastal Waterway to Wrightsville, where we anchored for two nights to let some stormy weather pass over. Lots of reading for two days. Then on up the ICW to Swansboro. We anchored there, but dragged in the shifting current, so we tied at the town dock. That worked out well for getting groceries and for doing some cleaning of the side of the hull alongside the dock.

Then on to Beaufort, NC, where we stayed in the fancy/expensive marina right in the historic heart of town. And where my distant cousin Emily, whom I had never met, came to visit, along with husband Bob, my sister Nancy and her husband Frank. They all treated the crew to a superb dinner — much appreciated! I could easily have stayed a while in Beaufort, and taken Bob up on his offers to show us more by land or sea. But we were on a mission, so off we went in the morning, on up the ICW to Pamlico Sound. We had the current with us through the narrow channel, and the wind with us once we got into the open water, so we made great time.

In the afternoon the wind nearly died, and then came up with a vengeance (29 knots) as we approached our chosen anchorage. Made for some exciting sailing beating into the shallow creek. It was a spot that simply looked protected on the chart; I had no idea what the area would be like. In fact it turned out to be remote…almost desolate…just a few lights in the far distance at night. Beautiful.

Next day we had another great sail up the sound, and we selected another nook on the chart for anchoring. Again, completely empty. I had no idea that Pamlico Sound had such wilderness.

In the morning we were off one last time, again with a good breeze, to Wanchese. So…if things go well, this may be the end of the line! Done. Our mission now (which Bob, Joe and I got a start on over the past several days) is to clean everything and remove three years (and more) accumulation of “stuff” from the boat. Monday the boat will be hauled, so work can begin on the bottom and the saildrives. Then Bob and Joe will depart, and Hallie will arrive to spend the week working with me. Then we show the boat, and head home. Maybe I will be back in a month to sail the boat to New England. Or maybe the boat will no longer be ours. It’s all journey… 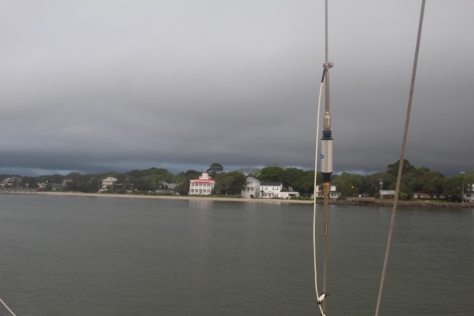 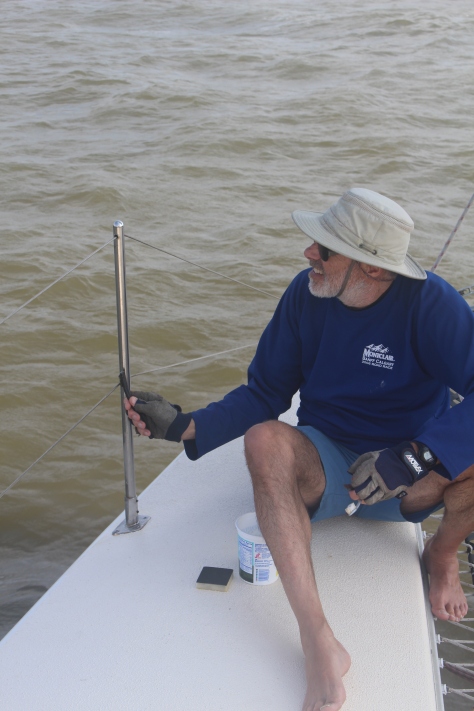