[Written en route to Niue]
It is 1,000 miles from Maupiti to Niue — about a week, and we’re four days into it. The weather has been beautiful, the winds light, no rain squalls, so there’s been lots of time to contemplate…emptiness. No boats. No land. A thousand miles of ocean. Bill has been reading, and Bob has been learning everything about the boat. I’ve been doing a lot of staring at the ocean during the day, and staring at the sky at night.

The emptiness is punctuated by little events. We caught a fish the first day. That generates lots of activity: trying to slow the boat down while we reel it in; all taking our positions on the stern to gaff it and to blow a mouthful of rum into its gills to kill it; filleting it still on the back of the boat, to contain the mess; cleaning up the mess; and of course cooking and eating it!

We haven’t caught a fish since, but yesterday we had small tuna swimming with us. I’ve never seen this before — fish acting like dolphins. They would swim alongside and sometimes in front of the boat. Then disappear for a few minutes, and then they’d be back. We were trailing a lure at the time, but I was a little relieved that we didn’t get a strike. Didn’t seem right to catch a fish that was being a sociable escort.

The stars in the early night have been magnificent, and then the moon rises, and paints its own beauty across the sky. Last night I saw six satellites. One was so bright we were convinced it had to be the space station. But then ten minutes later I saw another one that was equally bright.

We celebrated Bill’s birthday. Bob had brought a two kilo bag of granola from home, as a gift from Bill’s daughter. (She made granola and sent it to Bob, but it didn’t get there in time, so Bob bought some.) Bob made a card and wrote a poem to go with it. I baked banana bread.

Receiving emails via the radio is a treat. Missives from family and from the other rally boats. Lots of time to think about family and friends (and future boats and adventures). Lots of time to enjoy emptiness.
—–
I got interrupted at this point by a yellow fin tuna on my line. An hour later he was filleted. Then I had to finish the loaf of bread I had started preparing earlier. And then I offered to make dinner even though it wasn’t my turn in our rotation, because I found an interesting recipe for fish curry. After dinner we needed to get the spinnaker down because the wind was veering too far forward. By then it was time to look for satellites (just for fun). No satellites tonight (we might have missed prime spotting time when we were busy with the spinnaker), but two airplanes. I’m guessing we’re approaching the flight path between New Zealand and Hawaii.

So the last several hours have been busy, but now it’s back to the emptiness. Stars galore. I learned that the dark area next to the Southern Cross is actually a dust cloud that obscures the stars behind it. I have two more hours on my watch to contemplate that… 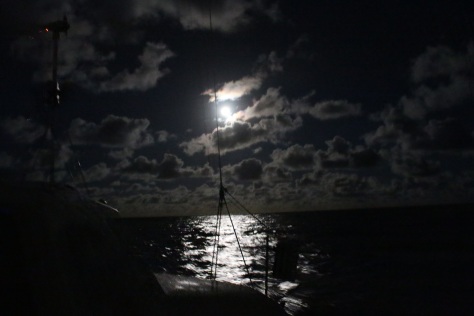