Because of the holiday, we could not clear with Immigrations on Day 1, so our scheduled Day 2 tour of Tual began with a visit to their office. The building was undergoing reconstruction-in-place. Without hard hats, we took a risk walking in. We were shown to a large room that had some chairs and lots of empty file shelves. And then we waited over two hours…

With reasonable good humor, in my opinion, we dropped the visit to the local craft market, and went to the next stop, a school with over 1,000 students ages 15 to 17. If we attracted attention in the street, we were cause for complete disruption of a day of school! Students were peering/hanging out the windows as we arrived. We were led first to the teacher’s lounge, where we found ourselves in a photo fest with teachers wanting photos with us, students wanting photos with teachers and us, everyone posing for anyone. Some teachers stayed on the sideline and looked dignified; others simply joined the fray.

Then we broke into small groups to visit individual classes. I walked into one, all eyes on me of course, and I said a robust “Hello!” An almost deafening “Hello!!” came right back at me. The students were very interested in us, but reticent to ask more than our names and where we were from. It was a science class, so we tried to understand what they were studying, and if they ever discussed climate change. It was difficult to determine any of this. Yes, we are told they cover climate change…but I don’t think the question was understood…

And just then my name is called at the door. There is a problem with our boat, I’m told. Luc assigns a car and driver for us, and Tim, Jesse and I leave the tour to return to the harbor and find out what’s up.

The boat has dragged its anchor, and blown into the seaweed farm nearby. Apparently we didn’t hit any of the other boats, and we appeared to be only moderately entangled in the many lines and floats of the farm. Our guide and another local came out with us on our dinghy, and there are three locals waiting for us in their boats tied behind ours.

Everyone had ideas about how to get clear. The one non-BPO sailboat in the harbor is nearby, and that skipper comes over in his dinghy to offer advice, too. One of the local guys jumps in the water, and clears some of the lines from our saildrive. But one he indicates that he needs to cut, and he gets a knife and cuts it. We are clear aft. Next we use the dinghy to put out our second anchor, in the clear water. We pull ourselves in that direction, but it is apparent that our first anchor line is badly fouled with the seaweed lines. Our diver asks us for a knife, and makes another cut. Then we can pull the first anchor up, but it comes up fouled in more lines. I don’t see why we can’t sort that out, since it is all on the surface, but our guy is at it again with the knife, and then we are clear. We motor up to an open area and re-anchor.

I stay with the boat, along with two of the locals, while the others go to find the owner of the seaweed farm, so we can make amends. I have a good time trying to communicate with the guys aboard (and at their request I give them some shampoo and body wash). Tim and Jesse report back that the owner was very nice, happy to accept an apology, but now they have to go to the pier to meet with someone to settle compensation. Shortly thereafter I get the update that we are being asked to pay damages that amount to over $1,000 US (15,000,000 Rupiah)! Yikes! Tim brings Jesse back and picks me up so we can get to the bank to exchange money before it closes in an hour…

At the bank we have to wait half an hour, so I get to hear from Tim about the dollar figure. Supposedly 18 lines were cut, and a value was assigned to the line and seaweed on each. The seaweed was ready to harvest, so there is a crop loss involved. But there weren’t 18 lines cut (there were three that I’m aware of), and the value seems arbitrary. Not clear where the numbers came from. When we get to the head of the bank line, we find that they won’t accept half of my US bills, because they have a crease, or an ink stain, or any sort of mark. We change money (another half hour), but we don’t have 15 million Rupiah.

Back to the dock, Luc is now there. He suggests that the settlement is negotiable, unless we already agreed. That’s somewhat unclear, as the negotiation all flowed in one direction, and I wasn’t even there. We get into a discussion with the brother of the owner, who is acting as his agent, about the cuts and the value. It is a long discussion with several people trying to translate. No, 18 lines were not cut, but that’s how many lines were lost from production, he explains. But who cut so many lines and why, when it might not have been necessary? Etc. Many people in this discussion, plus the usual kids watching. But all was sincere and friendly. The brother finally asked, “How much are you offering?” We said ten million, which we had in cash. He said okay.

Hands were shaken. Bills were counted. A receipt was written. Photos were taken to document the agreement. We apologized for the trouble. I think everyone is satisfied, and we are about $700 lighter. No one got visibly upset, except the tourism ladies who wanted to be sure that despite this very unfortunate accident that we will be joining tomorrow’s tour. Jesse and I plan to go; Tim will stay on the boat.

Obviously we missed the rest of the tour, though we had some interesting experiences that those on the tour didn’t get. The day was to wrap up with a restaurant dinner, but all three of us felt we had soaked up enough excitement for one day, and we had a simple meal on board. 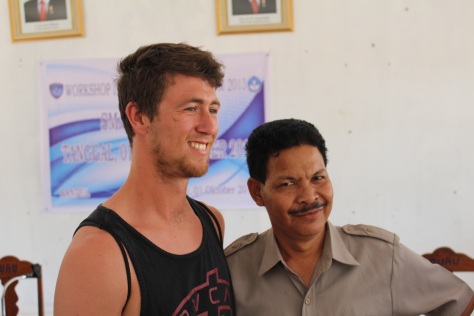 And then I’m sorry that I have no photos of the web of lines and floats that No Regrets strayed into. But after we got clear and re-anchored, we took a shot of the guys who helped us.