It was challenging getting to our final stop at Nongsa Point Marina, across the strait from Singapore. After two days of no wind, we had wind exactly in our face. But everyone made it on schedule, in time for our meetings with Jimmy Cornell to discuss what’s next for the Blue Planet Odyssey. We are now north of the equator again (barely); nice that Jesse got to sail “across the line.” I would have liked to jump into the ocean with him to celebrate, but it was at night in uncomfortable seas, and no one was of a mind for celebration. So instead it was a toast at the marina bar after arrival.

Our meetings with Jimmy went smoothly. Chapter Two announced, as we had expected, that they would not be continuing across the Indian Ocean. I don’t know if I ever mentioned that Joyful withdrew for health-related reasons in Mackay. So now we are four: Blue Wind, Tahawus, Maggie and No Regrets. The other three boats have all considered alternatives to continuing, but after our meetings it appears that they will continue.

Jimmy explained that the old plan to sail to Sri Lanka in the spring would not work unless we left earlier, because we would likely encounter headwinds going from Sri Lanka to Chagos. Maybe it was good that we had headwinds getting here, so everyone was crystal clear that they would like to avoid that! For most of the boats, including us, it wouldn’t work to go earlier, because people had already made plans for the intervening time (like me being home until March 1).

So the alternative is a different route, south along the west coast of Sumatra, which we will do in leisurely cruising fashion for the month of April. This coast is rarely visited by yachts (even Jimmy has never been there). It should be interesting. Then we will strike west to Chagos (assuming we can get permission from the Brits to stop there, but that shouldn’t be a problem unless war happens…Chagos is a military base…and unfortunately the idea of a war is not as remote these days as one would hope). After Chagos we will sail to Mauritius and then Reunion. There we will wait a couple months for the weather to change before sailing on to South Africa.

We met with a group of local reporters, asking us about our experience in Indonesia, and about the BPO. Jimmy stressed the climate change focus. This led to a little discussion about the trash we saw everywhere in Indonesia, including seeing kids toss plastic bottles/containers into the ocean. Maybe the government could promote awareness of this being an issue…? Then Tim turns the tables on the reporters and brings up the amount of petrochemicals used and supplied by Indonesia; tough issue, but is there a way to reduce these big contributors to climate change…? I think most of the people in the room were uncomfortable with Tim bringing this up. After all, this was supposed to be a chance for reporters to ask us questions. So they shifted the conversation to cleaning up litter, and recycling, and there was a sweet anecdote about a student at a school picking up the one bit of litter that was visible. Jesse told me later how much this angered him — that when Tim brings up the tough questions, others deflect back to more “polite” conversation… Tim does raise the tough issues, and he doesn’t care much about sugar coating them with politeness. Doesn’t win him a lot of friends, but I agree with Jesse that his making people uncomfortable is not necessarily a bad thing.

This marina is of the resort variety. Expensive restaurant (at least by Indonesian standards), lots of security, no town nearby. What is attractive about it is showers and laundry service and having all the boats together at the dock so we can visit with each other. It isn’t really Indonesia anymore; it is a suburb of Singapore. That’s okay; Jesse and I are just finishing up boat chores, cleaning and packing, and we will be on a ferry to Singapore tomorrow morning. We will spend three days doing nothing in particular in Singapore before we fly home.

We had a farewell potluck party on Chapter Two. I will miss them. I will miss all the BPOers for the next three months. And I realize I am going to miss No Regrets a lot. I like this boat, and it has been a good home for the past year. When a nice breeze came up this afternoon I wished we could set sail and go…onward. Oh well, I’ll remember that feeling for when the time approaches to return. 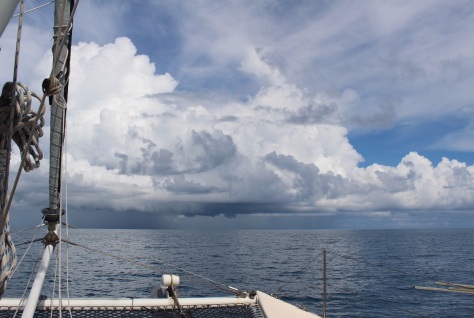 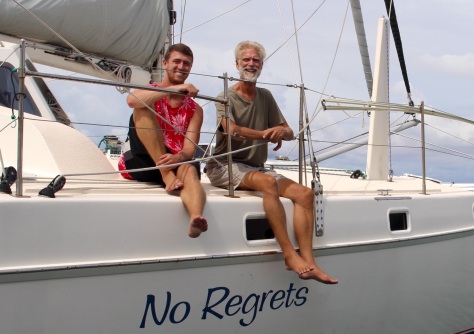 2 thoughts on “And Then There Were Four”