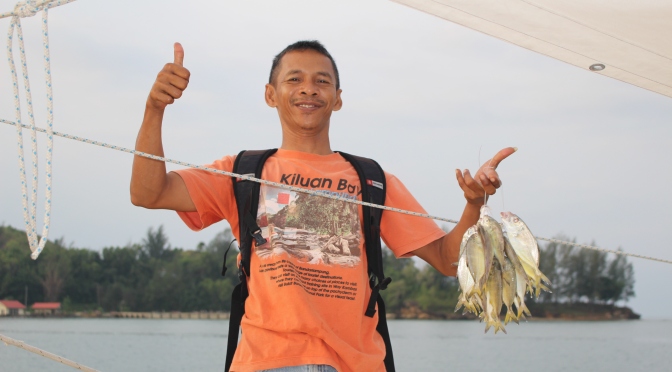 Next day we went another 30 miles down the coast to Pulau Raya. Many floating fishing platforms here, that come to life at night. We anchored off the beach near a small town. From ashore came the sounds of a soccer match — we could here the referee’s whistle, the announcer, and the cheers of the crowd when a goal was scored.

Two young men in a fishing boat came alongside, and one did not wait to be invited to come aboard. To me this is a major breech of protocol, but he was so charming — and he spoke pretty good English — that I forgave him. His name was Hendra. He taught himself English by speaking with people who came to help after the tsunami, and with yachties. He asked for beer. We lied and said we had none aboard. But we said if he caught a big fish we would buy it from him in the morning.

Tim asked him lots of questions, including if there are orangutans in the jungle nearby. “Oh,” he says, “I have one of those.” I assumed he misunderstood. But no. He says he has a two year old orangutan that he raises like a pet. Tim asks if other people do that. “No, just me.” Tim asks if the authorities might not allow this. “In Aceh it would be a problem. Here, not a problem.”

In the morning the two of them are back, but no large fish. We chat. They smoke. We tell them, “Save your money. Save your body.” They understand, but don’t appear likely to quit the habit. Hendra wants to know how much a boat like ours costs. I blank out with the number of zeros on Indonesian currency, while Tim tells him 50 million. This seems like a big number to him and to me, though later I realize it is only about $4,000.

Hendra invites us ashore. He will be our guide if we need anything, or if we want to go meet his orangutan. But the forecast is for favorable winds to sail the 120 miles to the first of the offshore islands. So we take his phone number to pass to other boats, and say goodbye.

The wind turns out to be perfect…until 1am when it builds to 30 knots and changes direction repeatedly. Oh well, not a lot of sleep, but we get to Simeulue. We poke into an almost land-locked bay to try to anchor where the chart says it is 27 feet deep. There are a few houses/shacks there, and children calling to us from shore, and it looked very inviting. But way too deep! Sure, we could find 27 feet, but a wind change would likely put us on shore. We went back outside and anchored along the coast. Some fishermen in canoes stared at us, but no Hendra appeared.

Today we motored down the east side of the island to its major town of Sinabang. Despite having 20,000 residents and a commercial harbor, it is not even mentioned in our little cruising guide. The channel in was buoyed, which was helpful since the layout didn’t correspond very well with our chart. I have to keep reminding myself not to take the charts too seriously here.

It was unclear where to go along the long waterfront, and again the whole area seemed overly deep. But as we neared the town we saw another catamaran anchored. We pulled up alongside and hailed them (waking them up, I think). It didn’t work to anchor near them (too deep, too shallow, or too in the way of the big ferry that (we learned later) runs to the mainland twice a week. We moved out and anchored next to a tiny island a quarter mile away. Probably a better choice anyway, as kids were swimming out to the other boat, and the call to prayer was very loud there, and mosquitos would be less likely at our spot.

We paid them a visit. Two men…French…on a month’s holiday…sailing from Thailand on a 34 footer that is very much like a Maine Cat 30. It is owned by one of the guys (who lives/works in France six months of the year, and lives in Thailand the other six), and it is available for charter. Very nice boat. I could see chartering it from him if I ever wanted to sail in Thailand again.

We went ashore and had an Indonesian dinner, bought ice cream for dessert, got bread, and gasoline for the dinghy. Lots of young boys wanting money, or whatever was in our shopping bag, or to swim with our life jackets from the dinghy. One kid was very persistent, plus he seemed to think if he said something enough times I would understand him. I just started speaking to him just as much in English. It was kind of funny, especially when a teenager explained to me, “He not understand what you say!”

The teenager and a buddy of his were sweet. He wanted to ask me questions, but was very unsure about his English. His friend knew more English words but he was too shy to speak to me. So they would confer about how to form a question, and the outgoing one would ask it. One thing they asked, which surprised me, was my age. When I told him 62, he didn’t believe it — he thought I must mean 42! Interesting…

Tomorrow we will venture ashore again to find the market, as we are nearly out of fruit and veggies and eggs. Maybe stay another night before we move on south.