The past five days have been busy busy busy, largely because Luc met us in Sabang (where we checked into Indonesia), and as we all know Luc sets up tours and dinners and special events every day! But first, I noticed that some of Chris’s snorkeling photos got deleted from the previous post, including one of my favorite blue and yellow fish, so I’m adding them here: 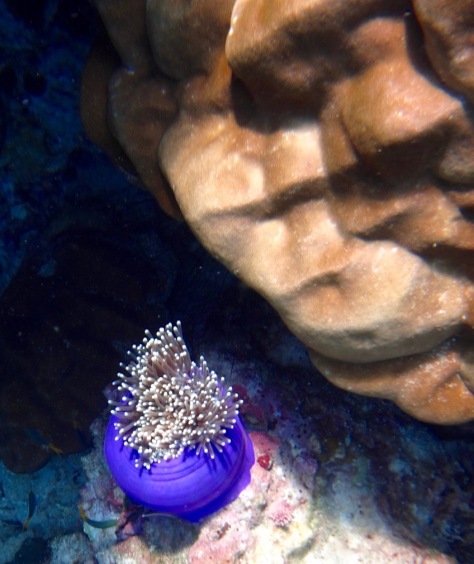 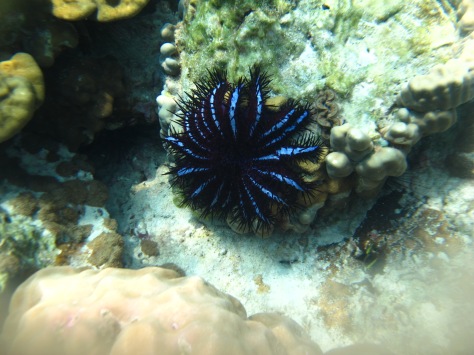 We had a good crossing from Phuket to Sabang. We had some wind, and it was nice to only motor some of the way. We mostly sailed with just our working jib — slow but easy and comfortable, and about at Maggie’s speed. Sabang has a nice harbor, but one has to anchor in about 60 feet, which is annoying and potentially unsafe.

Various authorities came aboard. The quarantine people went looking for ‘expired’ medications and cans of food. They didn’t find any out of date food, but they found lots of out of date medications, which they confiscated. Luc says their concern is that we might give old medications to Indonesian residents, and among their many regulations there is one prohibiting bringing these things into the country. No matter that Tim pulled up a medical journal with a study showing that 90% of medications are still effective 15 years after their expiry dates!

What did matter was that the government is trying to promote tourism, and welcome yachts, and Luc was connected with the officials in charge of that. They pressured the quarantine folks to return our stuff just before we departed Sabang (with a promise that we wouldn’t let officials elsewhere in Sumatra see the stuff, since they were violating regs by letting us keep it). There were four other yachts in the harbor, and one of them was not so lucky. The quarantine guy apologetically asked if there was anything in their old meds they couldn’t do without. The skipper got his epi-pen back. Then the official poured gasoline on the rest and lit it! Obviously the effort to be welcoming to yachts is still a work in progress.

Some of the authorities who came aboard asked for beer. I wasn’t prepared for that, as this area is very strictly Muslim and alcohol is illegal except at resorts. I gave them each a can of beer. I should have said no, and offered soda instead. Oh well, there haven’t been any repercussions that I’m aware of. We also had a quarantine guy ask for my yellow immunization booklet, which he took to make a copy, and said I could pick up later. This makes no sense, since it applies only to me individually, and because it is simply a hand written record in no way official.

Most importantly, I had my boat stamp. I ordered this via the Internet while I was home, and I don’t think it would be possible to deal with the authorities here without it. Lots and lots of multi-copy forms, and do the boat stamp on each copy.

Oh, one other glitch checking in. Tim had removed our American flag, and put up a United Nations flag instead. Nice thought, I guess, but it didn’t go over well with the officials. We were told later in the day to please fly our proper country flag. Again, no repercussions on this.

Luc then picked us up, plus the crews of Maggie and new friends aboard Gaia, and loaded us on to a little tour bus and took us to lunch. Then to a bank with ATMs to get our Rupiah. Then to a tiny museum (locked; hasty phone calls to get someone to open it). Then to the open market to get some fruit. Then back to the harbor so we could nap before going out to dinner. It was fun to hear the comments of Jim and Helen on Gaia, to the effect of, “We’ve been cruising for 21 years, and never had all our needs met on Day One like this before; maybe there is something to be said for participating in a Rally!”

I hadn’t gotten much sleep the night before, due to the large number of ships transiting the Malacca Strait, and Chris waking me up (as he should) when he was uncertain about safety. So I skipped dinner with the crowd. But instead of getting to sleep early, I got an email about suspicious charges on my credit card, and checking online I found over $4,000 of bogus charges in Thailand. I spent a fair portion of the evening trying to call the bank, and being left on hold. Thankfully I have Hallie to assist in such matters, as it could be a nightmare trying to straighten out such messes from here!

Next day Luc had us on an all day tour of the island. Visited a Japanese “castle” that turned out to be a WWII bunker and gun placement. Then to the “volcano” — boiling mud springs. Then delicious box lunches at a stop with a view. Then Kilometer Zero, a big monument under construction to mark the NW-most point in Indonesia. Bought a batik shirt. Stopped along the road to feed monkeys. Then a little hike in the jungle to a wonderful waterfall for a swim. We stopped on the way back for coconuts and to sample rojak, a local food specialty. Back in time for a short nap before our official welcome dinner.

As always, Luc had enrolled the tourism department in welcoming us. But it was a little embarrassing to have our Rally show up with only two boats. So Luc convinced three of the four non-BPO crews to join for the welcome dinner. Very nice. We were already becoming friends with Gaia, and now we got to meet two young couples from the US, sailing small boats slowly around the world — one of them with no engine! In addition to a delicious free meal, they got to see some local drumming and singing. I love being on the Luc plan! That is, just relax and do whatever Luc says. A little tiring, maybe, but always interesting and delicious and mostly free!

Next day we visited a junior high school. I should state here that recent history in this area is BT or AT. Before or after the tsunami (2004). I don’t think anyone was killed in Sabang. But many structures were wiped out. And on the “mainland” of Banda Aceh (a nearby area on Sumatra) many thousands were killed. I believe the total number of people who died on Sumatra was close to 200,000!

The kids we met with were only 3 when the tsunami hit, but they knew their family stories. One girl told of her father feeling the big earthquake, and hurrying the family to high ground. But her brother was off playing, nowhere to be seen. A tourist risked his life to search for him, but didn’t find him. Later they learned he had gone to higher ground with other villagers, and everyone was safe.

Our guide also got into his tsunami story. He was on Banda Aceh, and saw many people killed, even though he was a kilometer inland! People in his family were lost. He said he was very depressed for months, until his faith pulled him out of it. Tim jumped right in there with questions — how does he reconcile such a disaster with his faith in Allah. His answer was that the Koran says that “disasters are caused by our own hand” — meaning that man was not living right, and God was providing a warning or correction. Several people acknowledged positive things coming from the disaster — much of it in the form of outside help from NGOs and foreign aid and agencies like the American Red Cross. It’s hard to imagine the impact of the tsunami. We ate at one beachside restaurant that had BT and AT pictures posted. The AT one showed a foundation — nothing more.

So back at the junior high school, we tried to discuss climate change with the kids, but they spoke almost no English, and our translators were very annoying in that they would answer our questions rather than relaying them to the kids. We learned a little…most of their fathers fish…they like to swim and snorkel…and ride bicycles. But they were so shy, we couldn’t get them to ask us any questions. Very frustrating! But they were beautiful, and I hope they enjoyed having an unusual day at school. One group came up with an interesting idea, after it was learned that they still don’t have an adequate tsunami warning system — why not use the mosques, which are everywhere and all having blaring speaker systems, to spread the warning? Maybe this will be implemented…

This part of Indonesia is almost entirely Muslim, and pretty strict about the rules. One female guide/translator would not shake hands — no contact with men other than her husband. But for the most part the customs are similar to the areas we visited five months ago. A group of young ladies working at a restaurant giggled when I came in, and indicated that they liked my beard. That happened once before back in Tual. Okay by me!

We did another group dinner the evening before Luc left, and the tourist guys presented us each with gifts. Luc of course gave them BPO plaques. The food was great, too. I’ve grown a little weary of the Indonesian rice and fish and spicier fish and even spicier fish, and it was delightful to have a good pizza and fresh Greek salad at “Freddie’s.” Freddie is an Afrikaner who came to Indonesia to help after the tsunami, and he stayed. You can rent a nice bungalow by the beach for less than $30/day.

The dinner was sort of a goodbye to Chris also, since he had a plane to catch in the morning. Given the tension that would flare up between him and Tim, and Chris’s seasickness in relatively mild conditions, I think it is good that he has made other plans (to travel backpacker style on his own). We are in contact with a new guy, T.C., who we think is going to work out, and meet us before we leave Sumatra. He hasn’t purchased a ticket yet though…