I was happy to leave Sinabang. Too much commotion when we went ashore. Especially when we walked by a school where the kids apparently were on recess! A cacophony of shrieks and “Hey Mister” and “What is your name?” Almost everyone is friendly, but we did have a couple young men flip us the finger as they went by on a motorbike. I also noticed an older woman give a disapproving stare at Tim’s legs. His shorts were too short, plus his shirt nearly covered the shorts, so the net result was probably disrespectful.

We headed south to the island of Belayar, into a passage between the two islands that gradually got narrower but remained deep. We anchored in a nook among mangroves, with no sign of humanity in sight. But we could hear the distant town sounds — an occasional vehicle, and the distant call to prayer.

I was awoken in the morning by Tim talking with two fisherman. They had a good-sized red snapper, and we bought it from them with the proviso that they fillet it for us. Well, I don’t think fillet is in the Indonesian language or culture, but they did cut it into manageable pieces for us. They asked for food, and we invited them aboard for PB&J’s, plus Tim loaded them up with some crackers and snacks before they left. Very nice, and kind of fun trying to communicate what our various electronics and winches were for.

The snapper was good, but we are tired of eating fish and rice!

We continued south to Lasia. Beautiful and empty except for a couple fishing boats at anchor. We swam ashore and walked some of the soft white sand beach. A squall came through during the night, but not of any consequence. Lasia was the first place we’ve been to that had no cell/data connection at all. For one night I couldn’t play online Scrabble with Hallie, and I really missed it/her!

Next stop south would be Nias, but it is too far for a daysail with little or no wind. So we turned east to the Banjak island group. Another squall along the way, but despite looking very threatening it didn’t amount to much. Anchored at the north end of Pulau Tuangku. Had another visit from fishermen. We declined the big octopus they wanted to sell, but we had a chat, with some assistance from an English-Indonesian dictionary. Other fishermen passing by have asked for beer. We always say no. Good cell/data connection once again… Made chicken and pasta for a change…

Off again in the morning, right into a squall that lasted half the day. First really heavy rain we have had. Took advantage and washed my sheets. Of course, I expected sunshine an hour later for the dry cycle, but didn’t get it. Things did dry out in the afternoon, just in time for me to have sheets to sleep on.

Sailed (mostly) to the Bay of Plenty surfing spot. About a dozen surfers out there, some from a big power catamaran where I imagine they live aboard for a week or two. There is a surfer’s guest house ashore. Possibly we could get a meal there, but it doesn’t seem worth the effort to rig the dinghy and go exploring to find out. After a busy sailing day it’s nice just to be at rest in a beautiful anchorage.

A canoe paddles toward us, and to my great surprise I see it is paddled by a bule (white person). His name is John, he’s from Florida, he works at the surfer camp six months out of the year, and has for several years. He says he’s never seen an American boat come into the bay! It is fun and refreshing to speak English with someone. I invite him aboard, but he has things to do.

We watch a movie, which is becoming a common evening activity. The bugs convince us to stop before the end, put screens in and retreat to our cabins. I’d like to read, but I don’t want to use the light and attract the bugs to my berth. I’d like to continue my online Scrabble game with Hallie, but we have no internet connection here. As Mom used to say, mockingly, “It’s a tough life!”

Well, it is…a strange experience for me. In some ways this is a cruising paradise. No other yachts. Make it up as we go. Beautiful islands. Squally, but warm, and so far all squalls have been manageable — i.e., we sail on with the jib. But on the other hand it is constant unknowns, running out of provisions with no immediate prospect for resupply, no restaurants, intense sun, and no ability to communicate much with the people who live here. One moment it seems wonderful, another moment it sucks, and I’m just trying to maintain my equanimity for another 2+ weeks until T.C. joins us. At that point I think we’ll be in prepare-for-the-crossing mode, and I won’t be ruminating about whether things suck or not.

Oops, I neglected to attach photos of Sabang in previous post! 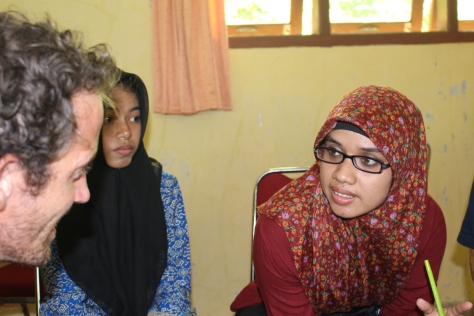