We left the Exumas earlier than we had hoped, because a cold front was approaching with northerly winds. We needed to get north before the wind turned against us. My mind was preoccupied with the difficult potential conditions, but our actual sailing conditions were perfect — an all day spinnaker run at good speed with no waves on the protected Bank. We approached Nassau by mid-afternoon, and we didn’t want to carry on toward Abaco until sunset so as not to arrive in the dark. So…although we had no plan to do so…we stopped at Nassau.

We didn’t stay long enough to see the sights (Atlantis Hotel/Marina/Aquarium/Casino/Resort). Steve bought us a chart kit for Abaco, and we had a forgettable dinner. But it was a good scouting trip; no need to go there again…

We left at sunset and by sunrise we were approaching the Cut into the protected Sea of Abaco. Again, nice sailing on the unruffled waters on the inside route to Hope Town. I didn’t know what to expect there, as I thought that many other boats might want to take shelter in the harbor. Would we find a mooring?

And when we made our way through the narrow entrance, the scene was not reassuring. The harbor was packed with boats, practically on top of each other! We found an empty mooring ball. We couldn’t tie on with our usual bridle, or we would be hitting the boat behind us. But the mooring system there includes two pennants, and we learned that you can tie directly on them to squeeze into the parking space.

I headed ashore quickly, because I wanted to make sure our mooring was a rental, and not someone’s private spot. No problem. Meanwhile another boat entered and picked up the last mooring nearby. And later what I had feared happened to them. Another boat came in, shouting that the first boat was on their mooring and had to move! Move where?? I guess they found another spot somewhere… In listening to the exchange (voices were raised, but the boats are so close we would have heard them anyway), we learned that that mooring was reserved by virtue of having a milk jug tied to it! How would a newcomer know? Nothing was written on the milk jug. Oh well.

Hope Town was seductively pleasant. Well protected. Restaurants here and there. Friendly people. Fresh baked bread. Hot showers at the marina, with no timer — endless hot water!! Laundry facility right there, adjacent to the bar. Nice walking through the little town. And a fascinating lighthouse to visit.

The lighthouse is iconic — you will probably recognize it in the photos. But I didn’t know that it still burns kerosene. And that it’s turning mechanism is mechanical. The keepers crank a 700 pound weight up to the top every two hours (they sleep? in the tower). The 8000 pound rotating light/lens sits in a bath of mercury. You can (I did) turn the whole 4 tons from a standstill with a hefty one-handed push. Very impressive mechanical machinery.

Seductively pleasant. Tempting to just stay indefinitely. Why go anywhere else? Hmm, well, there’s crew flying out and crew flying in to Marsh Harbour, a few miles away. And better provisioning there. I managed to overcome the inertia, though not before Steve took the ferry to catch his plane; Nora and I motorsailed to Marsh Harbour. Turns out this is a pretty nice place, too, though not as quaint as Hope Town.

This morning Nora left. Hard to believe it has been 7+ months and 8,000 miles since she joined in Mauritius. What a wonderful crew (and wonderful friend) she turned out to be! I will miss her immensely, but I believe she is a soulmate and we will cross paths again.

Bob (Shanks) and Joe (work associate of Steve’s) arrived this evening. Tomorrow we will start a week or so of cruising the Abacos. Then we will turn our attention to crossing the Gulf Stream and returning to the USA. 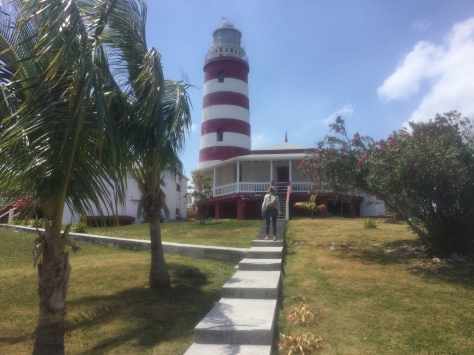 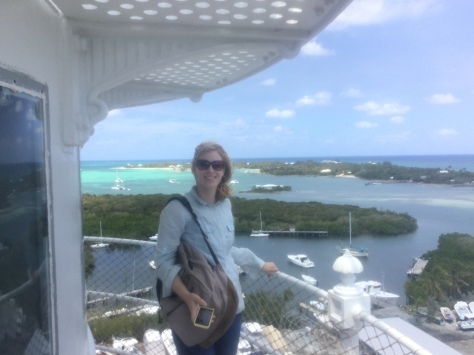 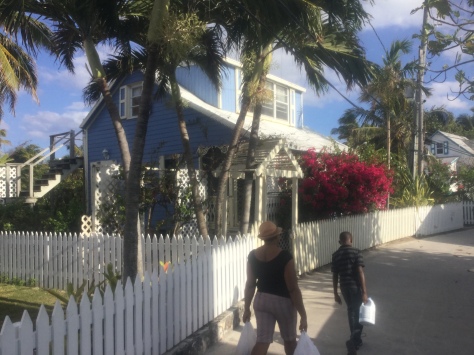