Here’s a picture of the failed shackle from the running backstay (see One Night at Sea). On the right is a shackle in place on the backstay; on the left is one incredibly bent shackle! The next day we found the screw-in pin near the mast (far from the running backstay). It was intact. That suggests that the pin actually unscrewed, and then the “U” portion of the shackle bent open (and the pin became a potentially dangerous projectile that happened to end up on the boat). 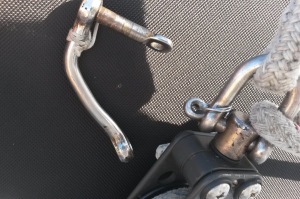 One of my buddies on my mens team was doing Thanksgiving vacation in Palm Beach. As we were sailing along with our small spinnaker, we went in close to shore and he snapped a photo. Doesn’t look like much sail area, but when the wind is 20+ knots it keeps us surfing. 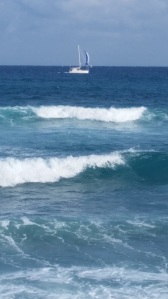 It was dark when we made the inlet for Ft Lauderdale. Motoring up the very narrow New River in the dark, with fancy houses and mega-yachts right and left, was a “trip.” Not like anything we’d done before. Here we are in our parking space, where we were continuously visited by people walking small dogs.  Also a shot of Tim at the masthead, peeking in the 5th floor condo windows (or maybe he was fixing our wind direction indicator, again). 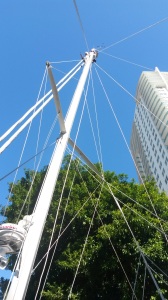 This town seems to be mostly about way too much money.  Expensive real estate and expensive mega-yachts. 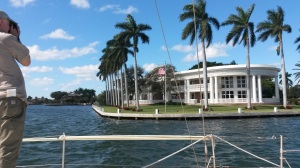 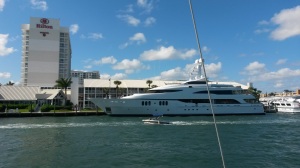 So the Buddhist monks made for an interesting juxtaposition… We got to see them making a mandala sand painting, and then ceremoniously destroy it, and pour the sand into the river so the good energy would spread to the ocean and the world. (Reminiscent of my motto – One Ocean, One Planet, One Future!) 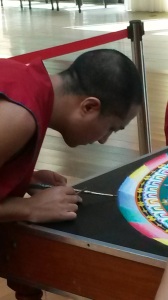 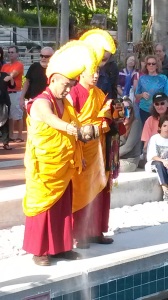 Say, isn’t that the catamaran “No Regrets” that I’m seeing from the water trolley…?