At Ft Lauderdale we said goodbye to Nora, and then had a nice day sail to the Miami area.  (Photo of a racing boat out practicing, and sailing circles around us.) 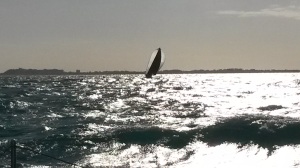 We tucked into No Name Harbor within a state park on Key Biscayne. Very pleasant.

With continued strong winds in a favorable direction we decided to do one more overnight to get to Key West. I initially wanted to see some of the keys along the way, but going “inside” (north side) of the keys is shallow and tricky, and “outside” there aren’t any good anchorages – just rows of moorings in the major harbors/towns. We decided to skip that and get to Key West for some fun.

But there was more adventure in store for us. We arrived off of KW at dawn, where we had to motor around most of the island to get to the mooring area. Some of the route was dotted with fishing buoys, similar to Maine lobster buoys but the floats are smaller. At one point we heard a small explosion from the area of our starboard propeller, and looking astern we saw several pieces of one of the foam buoys. A few miles further along, both engines came to a sudden stop, and somehow we had caught TWO buoys/lines at the same time — one on each propeller shaft. How we could manage to do that remains a mystery — we certainly could not have done it if we tried!

For the third time since leaving Maine, we quickly dropped an anchor with both engines out of commission. Bill volunteered to go for a swim, and managed to clear one prop. The other one was so tightly jammed that he couldn’t get the line off. We ended up cutting that line, and tying the buoy back on to it (so the fisherman wouldn’t lose his gear). We could clear the prop later, and continue with one engine for now.

Arriving at the mooring field (rows of many mooring balls and many boats; one can pick up any free mooring, and then pay a rental fee ashore), we surveyed the area and chose a mooring to pick up. But with only one engine it is trickier than usual to bring the boat right to the ball and stop, allowing someone forward to reach down with the boat hook and pick up the pennant line. We didn’t quite make it, so Bill turned to make a big circle and a second approach. But with only one engine the big circle didn’t go quite as planned either, and our prop clipped another mooring, fouled on it, and the strong wind pushed us swiftly into the bow of the attached boat. The big stainless steel anchor roller on his bow punched a hole in the side of our boat!  (A small hole, well above the waterline, so not something life-threatening.)

To avoid further damage we tied up alongside that boat, as the owner was drinking his coffee and wondering what to make of us. There didn’t appear to be any damage to his boat. But we were still fouled on his mooring, with his mooring line around our prop. Bill went back in the water and wrestled with it, but couldn’t free it.

With the other owner kindly providing a dinghy service, we carried a line out to the mooring we were originally aiming for, a couple hundred feet to windward. Hauling in on this line took the pressure off of the fouled mooring, and Bill got us free. Then we hauled ourselves up to the new mooring, with our profound apologies for disturbing the peace on the other boat!

Tim was immediately on the phone locating a yard that could fix our damage, and made an appointment for early that afternoon. I dove to cut free the remnant of line on our second prop. Although I think we all needed to “chill” for a while, we had to get moving again to make our appointment at Stock Island (just east of Key West).

Key West seems to be littered with derelict boats. One was sunk, with its mast still showing above the water. One was completely covered with birds. Several looked like they had been there for decades, with no maintenance. 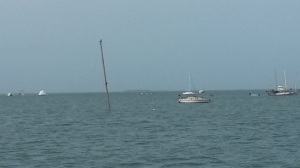 As we were taking in these sights, not paying proper attention to our course, we went aground!

We only need three feet of water to float. It was low tide, which was good, because we could simply wait and we would float off. But we had an appointment! We started rigging the outboard on our dinghy, so we could take an anchor out to deeper water and try to winch the boat off the shallows. But along came a local work boat, offering to pull us off for $50. After a brief hesitation, we accepted that offer, and he made good on it. He also gave us some names of people who do good work in the area.

Without further incident, we made it to the boatyard. There we discovered that their “travel lift” (movable crane for lifting the boat out of the water) is only 24′ wide. Our boat is 23′ 6″. That doesn’t leave much of a margin!

The hands at the yard were confident they could do it. We were less confident, especially given how much had already gone wrong in one day. But they did it.

So now we are sitting “on the hard,” getting our bottom repainted, which we wanted to do anyway, and negotiating for the repairs to our topsides. Plus various other projects, some of which are more conveniently handled out of the water. 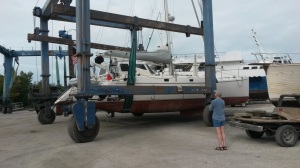 We rented bikes for a week, and yesterday we road around old (touristy) Key West.

The touristy stuff was fun, but gradually we’ve been getting to know the just-east-of-Key-West Stock Island area. It is a working person’s area — almost no tourists (yet). I found it unappealing at first, but it has been growing on me. In fact, I’m beginning to think we were lucky to come here, despite the unfortunate events that led us here.

We’re stuck on the hard for a week or so, waiting for the work to be completed. Getting around by bike is fun, but I’ll be happy when we are afloat again. Have you ever watched the TV show Cougar Town? I feel like the guy living on his boat in a parking lot…

4 thoughts on “To Key West”