The past week on the hard has in many ways been our most challenging week so far, and unfortunately the end is not yet in sight. The repairs to our hull are nearly complete — just waiting for the last coat of interior paint. The work looks good (too good, in that the surface has a nice gloss that is long gone from the rest of the hull). 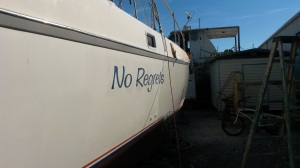 What’s been difficult about the repair is the epoxy and fiberglass dust within our living quarters.  But worse, we were parked next to a large steel (or possibly aluminum?) work boat where they were grinding the bottom and welding on cooling tubes. For our first days on the hard, with the wind blowing from the east, the noise was annoying (along with the Navy jets constantly flying low overhead). Then the wind shifted to the north, and their grinding dust covered our boat – ugly and black and into everything. We tried to ignore it, but it became intolerable.

We complained to the yard manager, who reluctantly moved us to a new parking spot, while muttering, “It’s a boatyard. That’s the gamble you take at a boatyard.” Not sure what’s going to show up on our bill…

While stuck here, we’ve done LOTS of projects on the boat.

Yesterday we thought we were down to the last time-sensitive project — getting a mechanic to diagnose why our starboard engine (the “new” one) was increasingly difficult to start, and belched black smoke when it did finally start. The mechanic did a cylinder compression test while we watched, and one cylinder was bad. [The compression was below the point where diesel will ignite, but close enough that once the engine started on the other 2 cylinders and began to heat up, the bad cylinder would kick in.] He asserted that the engine has more hours on it than we were led to believe, and it needs serious work. We agreed to have him remove the engine so he could work on it in his shop. Pulling the engine through the hatch is no small feat!

Tim and Bill watched as the mechanic pulled the engine apart, and demonstrated a long list of problems with it. What we thought was a nearly-new engine needs to be rebuilt! And…some of the parts are on back order from Japan. Tim has been on the phone calling all over the country for parts. We asked about going back in the water, and installing the fixed engine without another haul. Nope; not a good idea to have our saildrive transmission hanging loose, disconnected from an engine.

So…time to recalibrate our expectations about getting off the hard.

4 thoughts on “On the Hard”