In a word, our 3 1/2 day passage from Lombok to Kumai (south coast of Borneo) was HOT! The dark transom steps are frequently too hot to stand on, and of course the metal fittings can get hot, but never before have I experienced such heat on my feet just pacing the off-white deck. We had a very welcome wind blowing off of Bali the first night. But after that it was motorsailing, or simply motoring, most of the way.

Our direct path would take us over a reef in the middle of nowhere. Arriving in that area about mid-day, we decided to head in to the reef and snorkel. There were several fishing boats apparently at the fringe of the reef, so I chose an empty area between two and headed for it. Luckily I was also watching the depth, because suddenly it was ten feet, and then five! The engine went hard into reverse, and we stopped with coral clearly visible in the water all around, even though the fishing boats were still a mile ahead. Maybe the reef was an atoll, with a deeper area in the middle, and they were inside. The chart shows no detail. In any case we put out an anchor and a few feet of chain, and went for a swim. It wasn’t the most beautiful snorkeling we’ve done, but that wasn’t the point. It sure felt good to cool off, if only for a little while.

One more highlight of the passage was a fabulous roast duck, prepared by Chef Tim. In Lombok we had stocked up on groceries. One of the services available was “let Molly do your shopping for you,” where you simply checked off what you wanted from a list (including whole frozen duck), or simply discuss it with Molly, since she was happy to get anything. Along with lots of other things, we got a duck. Tim stuffed it and roasted it with an orange marmalade glaze. So good! We’ve been thinking of it as our Thanksgiving dinner, since Jesse and I are not going to be home in time for Thanksgiving.

Approaching Kumai we could smell fire, even though we were told it was out. We finally got clear of the ash, and now I feared we would be breathing smoke for two days… But no. Later we learned that we were sailing downwind of the area that had burned, and it smelled like a dead campfire, but it was fine when we arrived at Kumai.

Like so many other places we’ve been to, Kumai turned out to be quite different from what I expected. No ATMs? Guess again. Kumai is not the remote national park ranger station we had been led to believe. It is a busy port, with ships coming and going constantly. The waterfront had not only the usual docks and mosques and boats large and small, but also huge gray concrete structures, some seemingly with no windows and others with narrow slits for windows. They were a mystery, until later we learned they are full of nesting birds, with the nests harvested for birds nest soup (popular in China, especially for pregnant women). I think it is strange that enough birds would choose to nest there, and I would think that nesting materials would be scarce in such a densely populated area (dense with both humans and birds). We could hear the constant chatter of the birds, a mile or more away.

We came to Kumai for one reason: to visit the national forest where there are orangutans. In fact, Jesse and I joined a river tour boat a couple hours after we arrived, we did the overnight tour which returned the following night after dinner, and we made our departure from Kumai the next morning. (Tim did an all day tour the second day, that met up with us.) We never even put our dinghy in the water; never went ashore except on the tour. Our only business besides visiting the park was to replenish our supply of diesel, which was brought to us at the boat.

We shared a tour boat with the Tahawus crew. We all lived on the upper deck, while the crew and cook lived below, and our guide went back and forth. The food (five meals plus tea and snacks) was excellent. Our sleeping quarters was the same area where we ate and sat watching the jungle glide by. Mattresses appeared from below, and mosquito netting, and it was pleasant to sleep with the sounds of the jungle all around. And I do mean all around, since we simply pulled to the side of the river and tied to some vegetation for the night.

We made three stops near places in the park where food is provided for orangutans, and they commonly come to eat. Sometimes they don’t come, as the food provided is not their favorite. They would prefer to eat durian fruit than bananas, so they often do not show when the durians are ripe. But we saw orangutans at all three spots.

The orangutan habitat is threatened. The biggest threat currently stems from the commercial production of palm oil. This oil is in high demand for its low cholesterol and other desirable properties. As a result, forest is being cleared at a dramatic rate in Indonesia and being replaced with palm oil farms — the diverse natural habitat replaced with a monoculture. The land is often cleared by burning, which is assumed to be the origin of the fires that spread into the national park.

Our guides are members of a group called O Green. They call each other “brother” and they are on a mission to save the orangutan and lands that are their home (both the animal’s home and the people’s home). They do the tours that raise money and raise awareness. They fought the fires. The organized the townspeople (school children especially) to plant seedlings after the fire. They raise money to purchase private land across the river from the park. A few hundred meters in from that river bank it is all palm oil farming now. They hope to purchase the remaining strip of river bank to protect the habitat and beauty. They have purchased one kilometer. They dream of much more, though they know it is a distant dream, and there may not be time before the land is purchased by the palm oil growers instead.

I found it interesting to be so near the “front lines” of such a battle. Putt-putting up the jungle river for hours, seeing the monkeys and the birds and the fireflies and the remote beauty, and seeing the magnificent orangutans…and seeing in the distance the palm oil trees. The “O Greens” indeed seem to be brothers, and I’m on their side of the battle.

“Orangutan” means “person of the forest,” and let’s just say it: they are totally cool. So probably I will post too many photos. Enjoy… 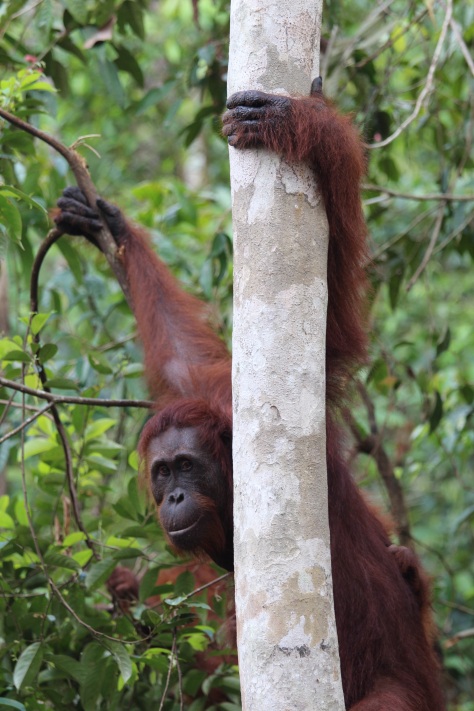 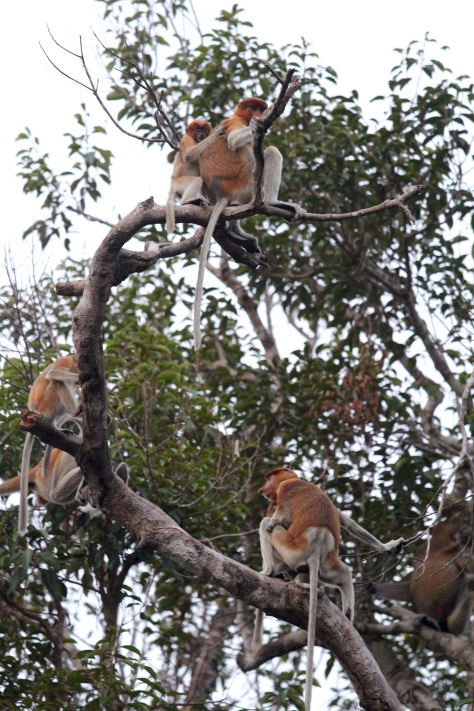 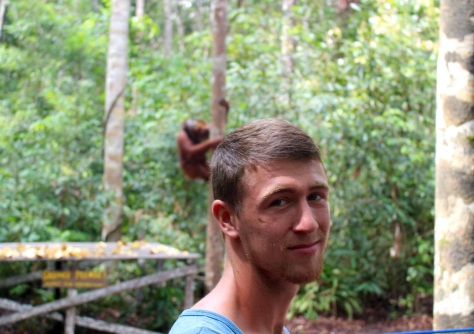 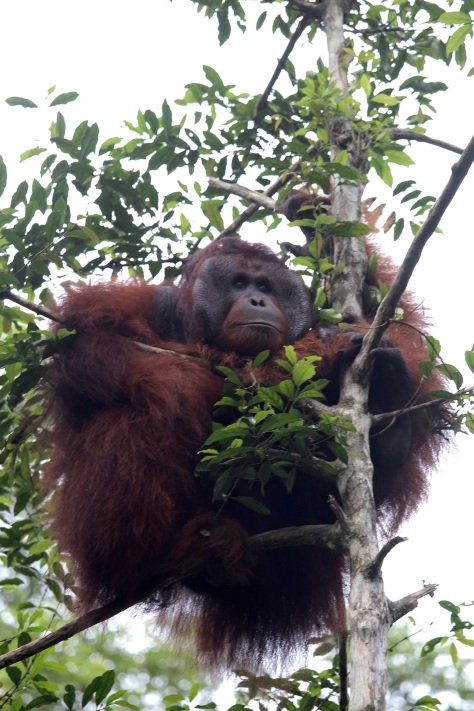 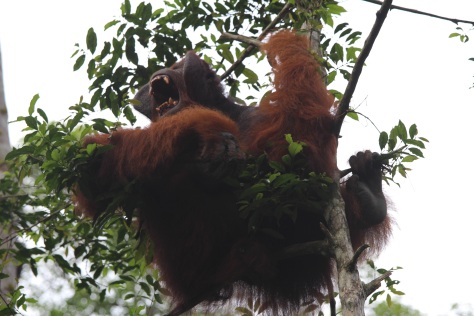 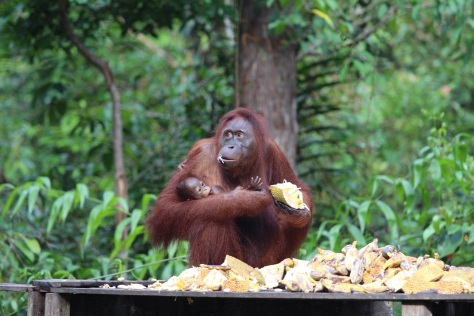