From all the comments (thank you!), one might think this voyage is over and the blogging done. I suppose I could simply declare a happy ending and say goodbye, but it ain’t over. Expect more posts.

Today’s contribution is from Nora, who graciously agreed to write (not her favorite thing to do) about her experience aboard. Enjoy! 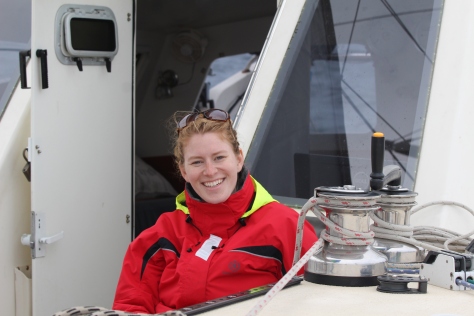 We had just left Mauritius and we were doing an “easy” overnight sail to Reunion. Easy is one of those relative words. If you’ve been sailing around the world and living aboard a boat for a year, sure it’s no problem. However, if you’re used to living in an apartment (which, I’m sure I don’t need to mention, is stationary), constant 3 foot swells take some getting used to. Liam and I had just joined No Regrets, and this was our first passage aboard No Regrets.

I took the first night watch, in which I threw up four times, once every hour. When I wasn’t throwing up, I was deep breathing, trying to stave off the next bout of nausea, making sure we didn’t run into any tankers, and calculating whether it was easier to throw up in the galley sink or overboard. I chose overboard, on the windward side. I was too sea-sick to grab a safety harness, so every time my stomach demanded, I would carefully scoot my butt along the wet deck (directly over Zeke’s bunk) to the lifelines and hoped whatever remained of my lunch wouldn’t be stuck to the side of the boat in the morning.

When Zeke came to start his shift he asked, “What were all the moving-around on deck noises from?”. We were only sailing with the jib; with any more sail we would have arrived in Reunion too soon and in the dark. In other words, there were no good reasons to be scooting around on the deck on my butt, especially without a harness. All I could muster as a response was “Uh, I’ve been a little bit sea-sick” — a huge understatement. It was all I could do to get into bed, and slam my eyes shut. I can be sea-sick or asleep, but luckily never both. I went to bed still wearing my rain-jacket and now soggy pants.

Did I know I was going to be sea-sick? The answer to that is, yes I knew. I have always been susceptible to motion sickness, and it was the thing I was most concerned about before starting the trip.

It has been a long-time dream of mine to travel, and I couldn’t imagine a more exciting and unique way to visit places I wouldn’t have had an opportunity to see otherwise. Prior to joining No Regrets, I had been stuck in a job that wasn’t a good fit, which helped me decide it was time to follow my dream. Before I could leave, I had to quit my job, move out of my apartment, and sell my car. After tackling my fear of quitting my job and living off savings, I was not going to let a little throwing up get in my way!

Once we arrived in Reunion, I got to experience the perks of traveling with the Blue Planet Odyssey. Luc showed up with rented cars which we drove through the incredible mountains, and the Piton de Fournaise volcano. Also, while in Reunion I got to know the lovely people aboard Maggie and Tahawus. Traveling with Rob and Carol, and Norm, Klaudia, and the boys was an unexpected gift of the trip. They became my traveling family and celebrated my Birthday, Christmas, and New Years with me, and countless happy hours, during my months away from home, family, and friends. I will miss having them around!

Reunion was a great break from my intense at-sea nausea. But when we began preparing to depart for South Africa, it occurred to me that I might be sea-sick for the entire 8-9 day journey. The longest ocean trip I had done without touching land was 2 days. I knew I would be sea-sick, but I didn’t know if I would adjust after 3 days like most people. My anxiety began to build the night before we left, and I fervently hoped I wasn’t going to throw up every hour.

When we left Reunion, my stomach was in knots, in anticipation of the nausea. Once we were out of the islands wind shadow we were in the waves of the Indian Ocean. I experienced the same symptoms as before, sluggishness, nausea, but I had discovered my technique for coping with nausea! I would curl in to the end of the settee, close my eyes, and let my body relax. This and some breathing could keep me from getting sick. I would crack my eyes open when I wanted to see what was going on, then quickly close them again. This allowed me to function when we needed to reef the main, or switch sails. After being on deck I would peel off my foul weather gear and curl back up on the settee until I was needed again.

I found the Indian Ocean weather to be predictably unpredictable. If I didn’t like the current weather, I had only to remind myself, “don’t worry”, because It would change in about 8-12 hours to something completely different. This kind of weather made staying hydrated a challenge. Not because I didn’t have enough to drink but because I discovered I hated peeing when we were underway. I had to climb down the stairs, through the galley, and past my bed to get to the head. A nausea-inducing trip, when the waves were large. At this point on windy days, I had to get my pants down without falling, as the boat bumped and slammed its way through the waves. This usually resulted in one hand on a grab bar and one hand for the pants; it’s harder than it sounds. It always took longer than desired, battling nausea and my bladder. Once sitting, I had to learn to time things precisely because on 30-knot wind days, I could “get air” between myself and the seat when a big wave hit. These are the details I learned along the way. No one tells you these things before you go on a long sailing trip!

During this passage, we had a light wind day, which provided us with the opportunity to take showers. So, five days into the passage, I took my first shower on the boat (and by shower, I mean cold water spritz, from a sink-like sprayer) on the back of the transom steps. It is quite an incredible experience showering with a view of nothing but ocean and blue sky around you. From the transom steps, I would watch the water bubble and swish past. It always reminded me how fast we were traveling through the water, when there was no land to watch.

The day before we arrived in Durban, we had 35 knot winds, and huge waves again. We had previously had some calm sailing before so the immediate switch from calm to heavy winds caused me to feel especially sea-sick. I was ready to see some land. The next morning the wind died, so we motored into Durban. I got to see my first whales of the trip as we entered the city harbor. We pulled up next to Tahawus in our assigned slip and were immediately greeted by Edd, our Point Yacht Club contact, who met us with South African beer. Hallelujah! I have never been happier to see a pail of frosty beers. All the difficulties from the passage faded away immediately because I WAS IN AFRICA!

I finally found my sailing groove on our way into Cape Town, our last stop in South Africa. We had unusually calm seas as we rounded the cape, and I remember savoring the hour between 7am and 8am before Zeke and Liam were up. That particular morning, I spent the clear, blue-skyed morning watching a seal play in the surf of our wake, as Table Mountain came into view.

I have learned, there are two types of cruisers in this world. Those who sail to go places, and those who enjoy sailing so much, they would be happy to skip most places and just keep sailing. I am the former, I enjoy sailing, but I think sailing is more interesting when you get to go to a new exciting place.

As we prepared to leave for Cape Town, I became even more aware of which kind of sailor I am. As we approached our date, Zeke couldn’t believe we were leaving Cape Town in only 2 days because he said, “there was still so much to do”. “I know!” I exclaimed. “I still really want to see the Botanical garden, hike Lion’s Head, and check out more restaurants.” While I was listing all the activities still on my to do list, I was watching Zeke’s blank look. It turns out Zeke had a different list in mind, that looked more like this:

Trust me, the list was longer. Zeke and Liam’s attention had shifted back onto the boat, while I was still trying to cram in more activities. They had the right idea, surviving the Atlantic crossing was certainly the priority. I just wasn’t quite ready to shift from tourist back to sailor.

In contrast to the Indian Ocean the sailing across the Atlantic was idyllic. Not only were we able to visit the beautiful sand dunes of Namibia, and the remote island of St. Helena, we had beautiful downwind sailing. Downwind is the best sailing angle on a catamaran. Although I needed some time to adjust to the motion again, it was much better than sailing upwind. I truly loved our relaxed, 15 knot winds, and sunny days, as we made our way towards the warmer waters of Brazil.

I departed No Regrets in Brazil to do some traveling in Argentina, then rejoined in Barbados. I sailed from Barbados through the Caribbean to the Bahamas, where I departed for the final time. I’m amazed to say that l traveled over 8,000 nautical miles, to 18 different countries and 32 islands. I feel immensely lucky to have seen the places we saw, thankful for the month I got to sail with my Dad, and all the wonderful people I met aboard No Regrets. I am particularly grateful to Zeke for taking a chance on someone who told him she gets sick in cars. I truly admired his thoughtful leadership and generous spirit and I can’t imagine having a better captain. Would I do it again? I would happily sail across the Atlantic Ocean again. As for the Indian Ocean… I guess it will depend on how much I like my next job!